The Minnesota Wild is a National Hockey League franchise that forms part of the 31 teams participating in the hockey league. They are based in the Central Division of the Western Conference. Since established in 1997, the Wilds only joined the professional ice hockey league in 2000. They are probably the heart of Minneapolis compared to the other teams, and the Xcel Energy Center arena is where they play their home games.

When betting on NHL games, you will come across tons of statistics about the team’s performance during the regular season and postseason. It is crucial to gather all the information you will need before you place your next Minnesota Wild bet. New bettors will be able to identify the franchise by its colors, spotting a red, forest green, and white colors. The Minnesota Wild logo is a wild animal that is creatively depicting a forest landscape and the sun setting off to the red sky.

NHL Betting Sites in the USA

All of Minnesota Wild NHL games are previewed for US players that want to place a wager on the game. With a total of 82 games in a season, you will get several chances to pick the team to win. Our gambling experts watch the games and compile stats that influence their predictions. The NHL computer picks also influence these predictions so that we get a  full picture of how the team has been performing. This relates to looking at Minnesota Wild regular season schedule, their NHL standings as well as players on the roster.

The Wild hockey team has been consistently making the playoffs and reinforcing the team with draft picks that have a promising hockey career. The 2018-19 NHL season ended on the sour note when the team failed to make the playoffs in five seasons. While they are not a title-winning team by any stretch of the imagination, the Wild record during the regular season shows that they are in the building phases of a championship-winning side. 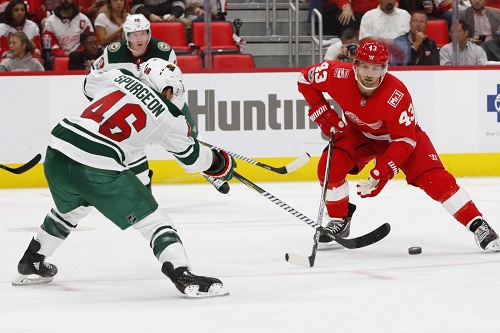 In the team’s history, the Minnesota hockey team has never won the Stanley Cup. Of the recent past, the team has gone as far as the second round in the previous five seasons. In that time, they lost thrice in the first round and didn’t qualify to play the playoffs in the 2018-19 season. The NHL team’s highest honors cam back in the 2007–08 season, where they were crowned the Northwest Division champions.

The formation of the club took place on 25 June 1997, but it would take the franchise three years before they could participate in the league in the 2000-01 season. The first few years proved to be tough for Minnesota, failing to make the playoffs. The first time the Wilds qualified for the playoff series was in the 2002-03 season, only to be swept by the Anaheim Ducks. Once the team found their footing, they would go on to break several records and make the Xcel Energy Center a feared place to play hockey. This is Minnesota Wild Arena, where they host their home games.