NHL
The Ottawa Senators play their first game on the road against the Columbus Blue Jackets after six games on home ice. They split their previous six games, despite
Read More 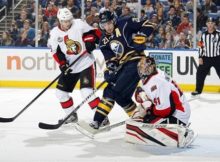 NHL
Buffalo Sabres hosts the Ottawa Senators in Tuesday’s NHL game following a surprise loss to the Nashville Predators on Saturday. The Sabres have had time to process the
Read More
Copyright © 2022 worldbookies.