Betting on tennis matches reaches its climax in the USA when it is time for Grand Slam competitions. The Wimbledon Championship is the most prestigious and oldest tennis tournament in the world. All of the top tier tennis players head over to the United Kingdom to play in the grass-court event. For players wondering when does Wimbledon start, this guide is for you. The Wimbledon Open is the third Grand Slam of the year, taking place from late June till the middle of July.

Both men’s and women’s tennis players bring their A-game during Wimbledon season. The tournament provides a platform for generations of players to verse their idols. See 15-year-old tennis player, Cori Gauff play her first Grand Slam tournament against the very best tennis players. Will Novak Djokovic defend his crown? Or the veteran Roger Federer get his record-breaking win? Find a list of US sportsbooks to bet on Wimbledon matches online.

2020 Wimbledon men’s and women’s betting odds are reflective of the ATP tennis rankings and the bookmakers look at the form of the players coming into the competition. You can find the Wimbledon tournament dates and schedule of your favorite to win the tournament on this guide. The Grand Slam tournament features men’s and women’s singles competitions along with mixed doubles tennis matches. Following the Wimbledon qualification rounds, players get ready for the knockout rounds. Find out which players are tipped as favorite to win Wimbledon.

Our expert tipsters have been gambling on tennis for a long time and have figured out the trends that lead to major upsets in tennis. A lot of professional tennis players are in their twilight years and there are several players that are ready to carry the baton. Roger Federer, who leads the way with eight titles is still recognized as a firm favorite among sportsbooks in the US. It has been almost a decade since he last lifted the trophy, with Novak Djokovic and Andy Murray having won it in that period. Grass court tennis is one of the surfaces that many tennis players struggle on because the ball skids a lot. Serena Williams is still chasing her 24th Grand Slam trophy, which has eluded her for a couple of years now since she took a hiatus. 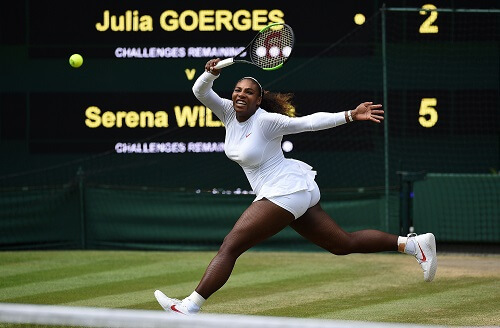 Past Men’s Wimbledon Winners and Runners-Up

Past Women’s Wimbledon Winners and Runners-Up